Day 6 — In Christ, I am treasured possession

I used to think I was the only who struggled with self-rejection. I knew the right answer in my head — that God loved me enough to send His Son to die on the cross for my sins. And yet the way I lived my inner life — I struggled to accept all the messiness I saw in me. I was afraid others might see it too and so I tried hard to cover it up by working hard.

And if you’d asked me — if all the work was good enough, the answer would be no. It was never good enough.

Twenty five years later after beginning my journey with the Lord Jesus, I still struggle but thankfully not to the same degree or same way.

But God’s Word says, let God be true and every man a liar. If God says it, then who am I to deny it?

I’ve been to therapy enough to know that I probably hold these beliefs because I heard it somewhere in my childhood or perhaps I didn’t hear what I was supposed to hear. In all likelihood probably a bit of both. 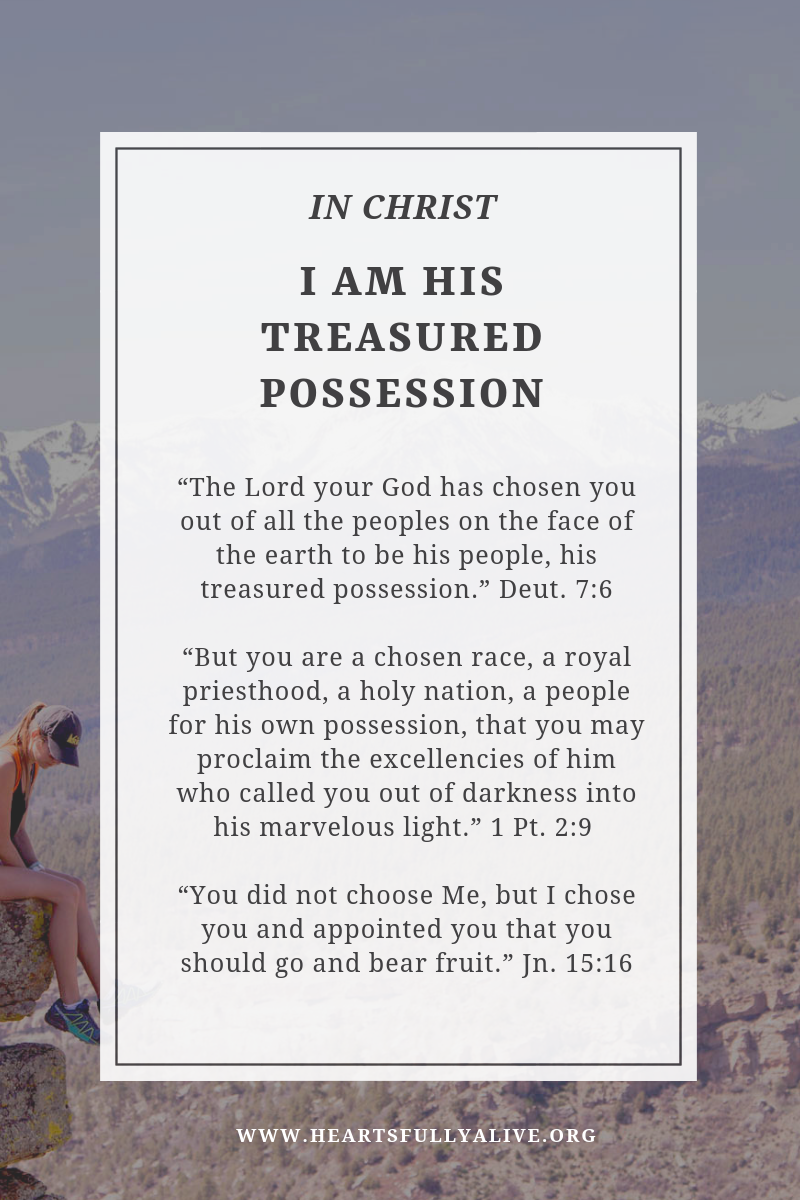 When my children were small, it gave me indescribable joy to see them play and find joy in being children. They delighted me just for who they were and I’d wondered if that is how God sees me? Did I give Him great delight by just being a child — a daughter?

And slowly, I began to see that I am His treasured possession and the heaviness that I didn’t even know I carried began to fall away.

God chose me; God chose you even before the foundation of the world. We were created to be His.

If you’ve never had a father or mother who told you that they were proud of you, hear Father speaking to you as He spoke over His Son, the Lord Jesus.

“You are my beloved Son; with you I am well pleased.”

You are His beloved son/daughter and He is well pleased with you — not because you’ve done something to earn it but because of who He is. You are the apple of His eye, a royal priesthood and a people for his own possession.

And even as I write these words that affirm who I am in Christ, I realize I need to sit with them — to let them sink deep not only into my head but into my heart.

“The Lord your God has chosen you out of all the peoples on the face of the earth to be his people, his treasured possession.” Deut. 7:6

“But you are a chosen race, a royal priesthood, a holy nation, a people for his own possession, that you may proclaim the excellencies of him who called you out of darkness into his marvelous light.” 1 Pt. 2:9

“You did not choose Me, but I chose you and appointed you that you should go and bear fruit, and that your fruit should remain, that whatever you ask the Father in My name He may give you.” Jn. 15:16

#Write28Days. This post is part of a 28-day writing challenge where I’m joining other bloggers to write daily during February.

“Teach us to number our days that we might gain

Almost a year later ... the little shop is now ope

We went looking for the beach and while it took a

So excited about what is to come. The first five a